A must have deck of cards for every poker player, the Dead Man's Deck Playing Cards Unharmed Edition.

Legend has it that storied cowboy and gambler Wild Bill Hickok was holding Aces and Eights when he was shot in the back during a Five Card Draw poker game in 1876, a poker hand that became known as the Dead Man’s Hand, AA88.

In stock
€14.00
Compare
Related Products
Check items to add to the cart or
Details

When Vanishing Inc. first released the "Dead Man's Deck", it almost immediately became one of their fastest-selling decks of cards ever. Beyond its stunning design, this deck had one of the most unique features ever integrated into a custom deck of cards. Inspired by the story of Wild Bill Hickock, who was shot dead during a poker game in the late 1800's, the "Dead Man's Deck" came with a replica musket ball piercing right through the center of the cards. While this unusual oddity was beloved by collectors, it also made the cards fairly impractical for magicians and, ironically, poker players.

After receiving countless requests for a "hole-less version", Vanishing Inc. is thrilled to introduce the "Dead Man's Deck: Unharmed Edition". With the exception of not including a bullet hole, every aspect of this amazing deck of cards has been beautifully customized in the same way as the original. It has been carefully aged to resemble the playing cards used during the era of Wild Bill Hickock. The "Dead Man's Hand" (Aces over Eights) that Wild Bill was rumored to be holding at the time of his death has also been splattered with blood to commemorate this fateful day.

THE DEAD MAN’S DECK: AA88
James “Wild Bill” Hickok is one of the most celebrated figures in the American West. Recognized as a Civil War veteran and renowned gunfighter, Hickok was most famous for his card playing skills. On August 2 1876, Hickok was shot in the back during a card game. The cards he held, Aces over Eights, has become know all over the world as the Dead Man’s Hand. This is the Dead Man’s Deck: AsAc8s8c.

These Dead Man’s playing cards are manufactured by Cartamundi in Belgium on premium Slimline B9 stock, the "Dead Man's Deck: Unharmed Edition" is now the perfect way to infuse a touch of history into any gambling routine. Each Dead Man's Deck comes with 56 playing cards with one photo playing card from James “Wild Bill” Hickok, one Dead Man’s Deck explanation card, one blank face card and one double backer card. 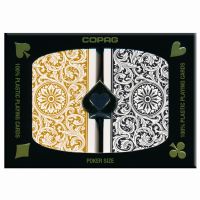 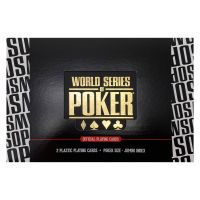 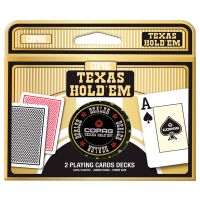 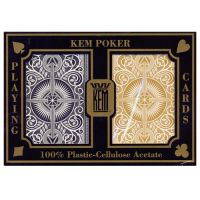 KEM Playing Cards Arrow Black and Gold
€36.95
Categories
Compare Products
Compare
Clear All
You have no items to compare.
Sign up for our FREE newsletter!
Newsletter